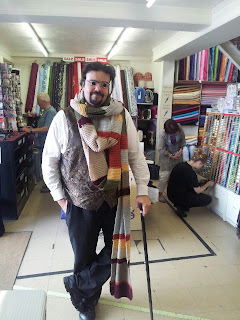 I've been sewing for over a decade now and have lost count of the number of wedding dresses and waistcoats I've brought into the world. However I do occasionally have a go at knitting. Although as a bit of a nerd I tend to make Tom Baker era Doctor Who scarf when ever I can. 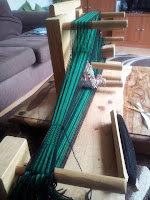 Knitting did not always come naturally to me though. Before I only ever used wool on my loom,  for making medieval belts and cords.

After looking into knitting more I found out many of my friends are accomplished knitters (including many guys. Boys love gadgets and knitting is full of them).

One subject that has come up in knitting conversations regards two different techniques for tubular knitting. Some friends like to use a circular  knitting needles  others like to use a selection of double pointed needles.

The Case for Double Point Needles. When you first see double point needles you may be forgiven for wondering how on Earth you can use these to knit a tube. When  I first saw them I thought they were  beefed up toothpicks.

Double point needles are the traditional way of sewing a tube, such as  a sock. As many of my friends are historical re-enactors  they have chosen this method to knit socks and snoods. The needles are used to hold stitches in place whilst another needle is added for knitting more stitches.

Aside from just looking impressive there are some advantages over this older (and some may say trickier) method.

Double Point Needles offer you more control. Circular needles can normally only be used for one size of tube with a circumference  slightly larger than the needles you use. (there are ways around this, but they tend to negate the extra ease of using circular needles)

Hints
If you are worried about the wool slipping off the needles then you can use commercially available stoppers (or make some out of corks). Whilst popping these on and off your needles can slow down knitting they can help someone new to DPN's to keep control of their wool.

Learning DPN knitting and turning a heel at the same time may be daunting, so start making a simple tube scarf before going on to socks.

The Case for Circular Knitting Needles. 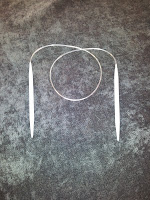 I have blogged about circler knitting needles before. (click here). A circular needle is in fact two needles joined together by a length of nylon or other smooth cord.

Many people find knitting tubes with circler needles less complicated than with double points. The wool is certainly easier to control!

However as I  said before, smaller tubes such as socks need smaller needles and these may be very hard to find.

In my opinion if you are making a sweater or other large project then the circular needles will give you constant and speedy results. However it is worth learning double point needle knitting for smaller tubes.
What do you think?