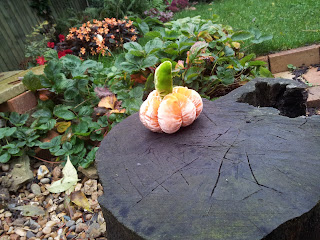 In the past I've made some intricate stuffed fabric Pumpkins. Whilst many people liked these a lot of people said they were put off by the amount of time each pumpkin would take, and the amount of sewing. After some playing around I've managed to create a very simple, but in my opinion rather cool pumpkin pattern. Don't feel constrained to orange fabrics, you can make a very ethereal creation with  a shimmering white or pale pink, or something festive with a Brocade. 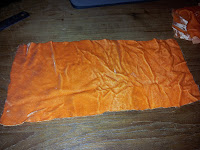 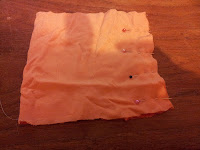 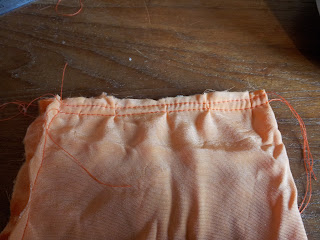 Sew two lines of parallel stitches at the bottom of the square. This is to perform a gather. You can do this perfectly well with hand sewing, just pull the threads tight and tease the fabrics into gathers. I used a sewing machine, anchoring the threads at one end with a back stitch but not at the other, then pulling the threads to make the gathers. 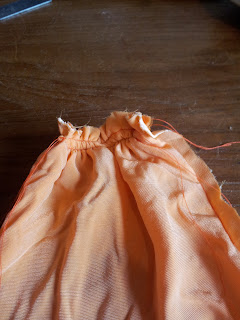 Once you've gathered the fabric like this top stitch between the two lines of stitching to secure the gathers. Fold  right side out. You should now have a little bag with an open top and gathered bottom. 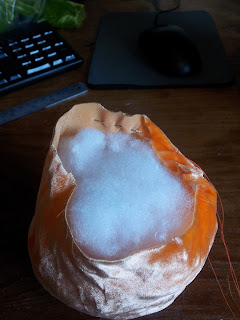 Fill the pumpkin with toy stuffing. You can use cut up scraps of wool or fabric to save money here, But a bag of toy stuffing costs under £4.00 and my bag has lasted me many many projects.

With a hand  sewing needle run a stitch along the top of the pumpkin, pull this tight and secure to create a ball. 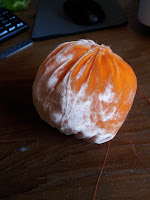 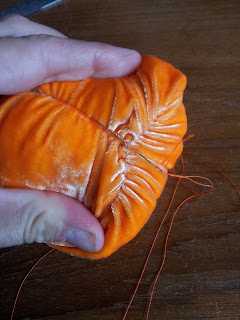 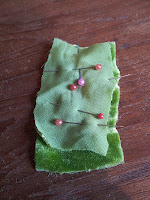 Take two rectangles of green fabric to be the stem. I used 6cm by 4.5cm. Sew together along the long sides and one short side (leaving an opening for turning through and stuffing. The line of stitching at the top doesn't have to be straight, making it a little slanty can make the stem look more organic. 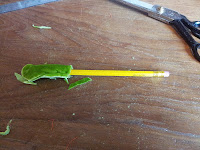 Turn through using a pencil (yes I DID spend 10 minutes trying to use my finger before I thought of the pencil) and then use the pencil to stuff the stem with toy stuffing. 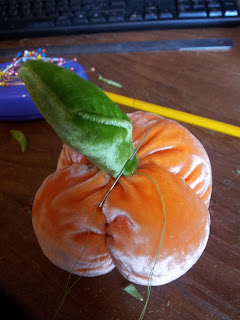 Stitch the stem onto the top of the pumpkin using small stitches going around the base of the stem. 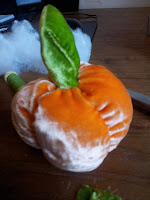 And behold a pumpkin. I thought this was cute, however my favorite pumpkins have more grooves so I added another set of four using the same method as the original grooves.

I am rather proud of my little pumpkin. There may seem to be a lot of steps but only because I wrote down EVERY little thing. You should be able to make up one of these little guys in 20 mintues or so. You could even cut out triangles  in felt to make a Jack-o-lantern and glue it on with fabric glue. As well as Halloween these decorations could be used for an Autumn display  or part of a costume (be it the green goblin or headless horseman)