The Royal Wedding is only a few days away and we at the shop have been fascinated by it. Some people have been very  dismissive of the event complaining loudly about the cost of policing the event or resenting what they've seen as enforced celebration of the Royal Family. Some of us on the other hand have a different take on the upcoming festivities.

One of my most powerful early memories was regarding Prince Charles and Lady Diana getting married in the 80's. The build up and excitement was immense. Street parties were arranged, local working mens' clubs put on cream teas and pulled the telly out for all to watch. In school we staged our own royal wedding (I was Charlie) and there were fancy dress parties EVERYWHERE.   Why bring up the past? Because kids today deserve the chance to make their own happy memories like I did, like the rest of us have at some point. One lady I know point blank refused to let her little girl be involved with a party at school in case it 'Brain Washed her'  There's no need to worry about them becoming conditioned into certain beliefs regarding a Monarchy, they'll make their own mind up when they are older.  Which girl doesn't want to be a princess? Lets all leave politics and the recession to one side for a day they take up far too much of our time already. Instead let's all seize this opportunity to share time  with our friends and family and just celebrate ANYTHING, ANYWAY this Friday. 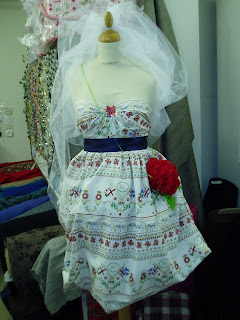 If you're hitting a pre-arranged party why not make up something simple like a circle skirt, or waistcoat in red, white and blue, or even some union flag fabric? If you're just having time at home with the family why not make the kids a simple wedding veil or resets?  In short, it doesn't have to be spectacular, it doesn't have to be integrate, just a little different, and a bit of fun.