How to make an organza gift bag. 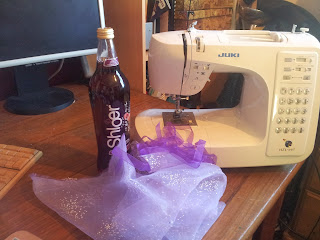 Sometimes gift wrapping is there to disguise what a gift is, but other times you just want things to look pretty.  We have shown you how to make a pouch before, and these are great for gifts such as dice or other knick-knacks and make great gifts by themselves. Organza gift bags are a fantastic way to add sparkle to a gift such as wine, or for placing lots of smaller gift wrapped presents in.

I chose organza as to me it's very ethereal and magical. However it's iridescence causes one problem, you can see the seam allowance. So for this gift bag we will use French seams which look much neater than a visible rough seam.  Another advantage of organza is that it is very easy to store your left over bits for projects just like this. Check out our guide on how to organize your fabrics. 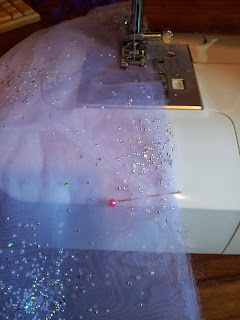 Cut out a rectangle of organza. Make the rectangle about 50% larger than your gift. 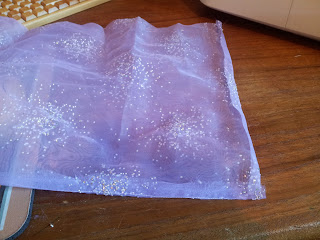 Press the seam allowance to one side.

Turn the bag inside out and again press the seams so they are neat and straight. 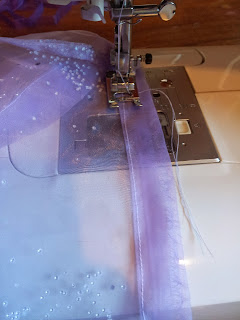 Step Three
Sew along the seam allowance. Now if we turn the bag  right side out we can see the seams are now totally enclosed. This is not only more attractive than rough seams being visible, it also makes the bag much more durable. 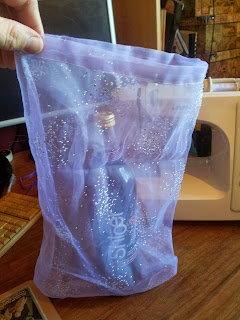 Step Four
All that remains is making the casing for the ribbon. To begin with hem the top of the bag (folding the rough edge in on itself, pressing and folding again).

Now fold the top of the bag down so the bag is at the right height. 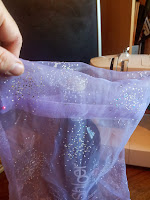 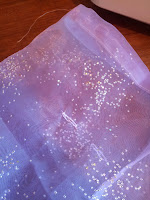 Now mark where you want the ribbon casing to be.
The unfold the top and place a small button whole on each side of the bag, where the seam casing will be.

Step Five
Fold the bag's top inwards so the bag is the desired hight again. Now just run two parallel lines on either side of the button hole stitch. 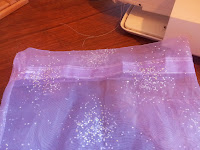 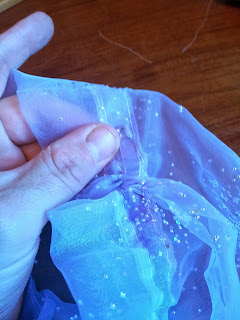 Attach a safety pin to the ribbon and use this to thread through one button hole right around the bag's casing and out through the same button hole. Repeat for the second button hole. Make sure to tie a knot in the ribbon once it's threaded to stop it being accidentally pulled out. 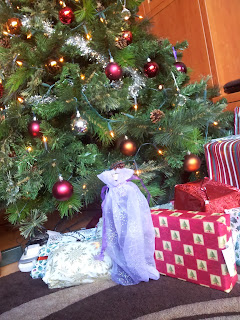 And behold you now have a stylish and possibly magical organza gift bag. A perfect way to add sparkle to any occasion. And a great use for left over fabrics.

From all at Fabric8, Merry Christmas, and a crafty new year to you all.

Email ThisBlogThis!Share to TwitterShare to FacebookShare to Pinterest
Labels: adding sparkle, Christmas., gifts, how to make a giftbag, how to make an organza gift bag, sewing 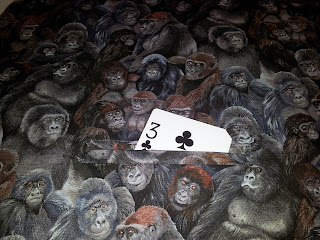 I've been teaching a friend to sew for a while now. Together we've made skirts and bodices and our current project is a waistcoat. Now I've been sewing for 10 years and have made well over 50 waistcoats, so I thought this would be simple. However in all my time sewing would you believe I have NEVER had to make a double welt pocket?  I've made so many single welt pockets I feel confident enough to add them to patterns that are pocket free, and to turn mock vet pockets into real pockets. I followed the advice I normally give customers in the shop when facing something new. Have a large mug of tea on hand and take your time.

We struggled with the instructions that came with the patern  for quite a while before making a big decision. Instructions are just ONE  way to do things.   I checked my books and looked on line and found MANY different ways of making a double welt pocket.
Then I found THIS video and decided it was the most simple way forward.

I thought people may find it useful to see how someone else interprets the instructions and so here is my attempt to follow the instructions.
What I used:
Seam Ripper
Sewing Needles
Interfacing
Chalk
Pins

Step One. Preparing the welts and the garment. 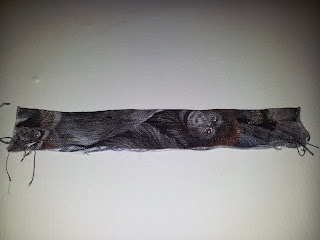 This method of making the pockets starts with the welts being interfaced and unfolded. The method I originally tried involved started with he welts folded in half (wrong sides together) and a baste stitch along the long edge. I either had to unpick the baste seam or cut out fresh welts and interface them. 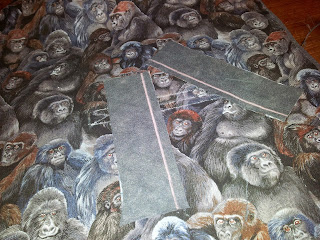 I had already slashed the pocket hole in the waistcoat open in the previous pocket making attempt. To keep the pocket area stable I pressed all the seams shut and interfaced the wrong side of the fabric over the slash. This should help keep everything stable whilst I sew.
When sewing in the middle of a garment you will not be able to see the seam guide marks on your sewing machine. Therefore it is a good idea to mark out the stitching line with chalk first.

Step Two. Sewing the welts onto the garment. 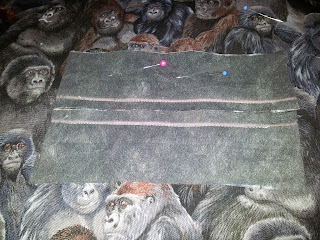 Step 3. Slashing the Garment and Turning Through. 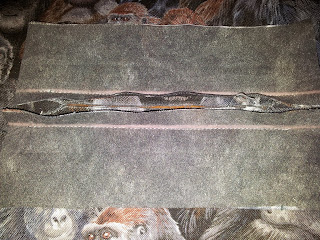 Fold back the welts so you can see the slashing line and carefully slash open the garment. Slash a straight line 1cm from the end of the cutting line on each side. Then cut two diagonal lines to 1mm from where the welt is sewn. repeat on the other side of the pocket. 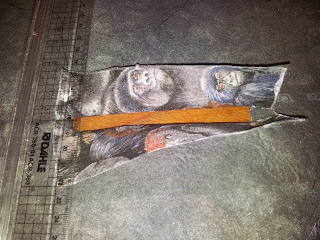 Fold the welts to the inside of the garment. 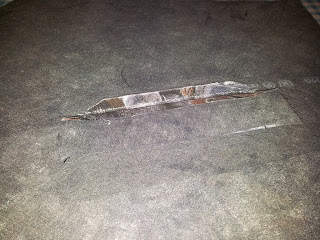 Press the seam allowances of the went and garment open. 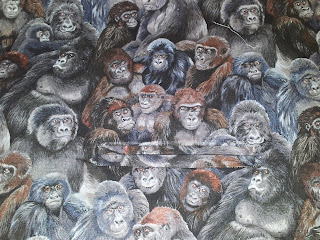 If everything has gone correctly the right side of your garment should look like this. The hard work is really done (and it wasn't that hard was it?) 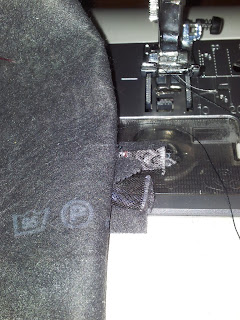 If you look on the right side of your garment the vent should now be taking shape. If you are following a pattern the welts should be folded so the meet in the middle of the pocket and their raw edges match up to the raw edge of the pocket slash. If not fold and press your welts into the correct position and trim them so they match the raw seam. On either side of the slash in the garment you should have two small triangles of fabric. These are the Duck Tails. Fold your garment over on it's side so the pocket welts and the duck tails lay flat on your machine and sew these duck tails down.

Step Four. Sewing the Welts on the Inside of the Garment. 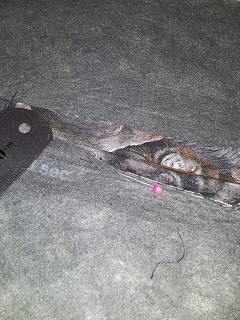 Give everything a good press again. Now pin the lose edge of the welt to the seam allowance on the slashed part of your garment. Sew WITHIN the seam allowance of the slash seam. Repeat for the second welt.  The welt is now secure, all that remains is sewing on the pocket bag. 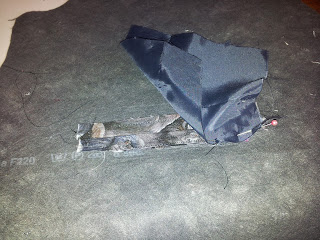 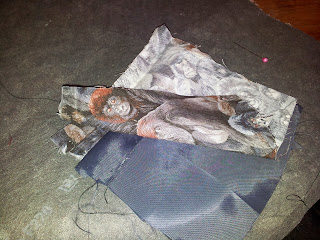 Repeat with the second pattern piece which is places rights sides together against the top welt (so the pocket piece is pointing towards the bottom of the garment. Again stitch to the seam allowance of the welt. 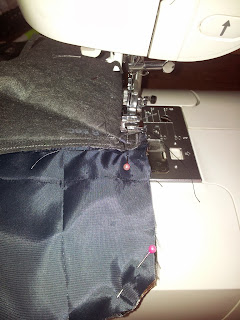 Rest the top pocket bag on top of the lining pocket bag, pin together and sew in place. 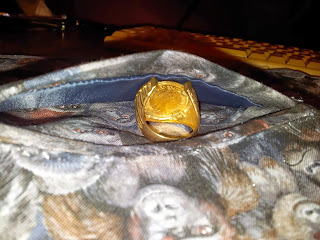 And behold you have a fantastic double welt pocket! When you open the pocket you will see the same fabric as the garment is made of.

I have to admit I really enjoyed learning a new technique for sewing. I'm also amazed at how neat and professional the finish on this pocket is. I will definitely be using this method again.
I must thank Diane Deziel for her amazing sewing tutorials on youtube. Check her out and see else you can learn.