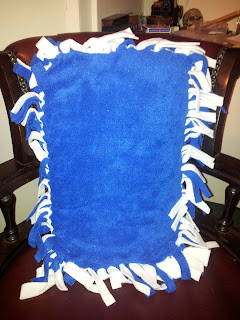 Half  Term Holiday is here.The blog already has a few projects suitable to keep the kids occupied  or ones that could be useful for the  up coming Halloween festivities. These include :
Pirate Shirt
Harem pants (or Pirate Pants)
Kindle Cover
Carrier Bag Holder
Plushie Pumpkin
and Hosting a Halloween Party

Some of these have a fair bit of sewing involved, others have less but here is our totally Sewing Free Cushion Cover. Perfect for those new to crafting, and something you don't need a well stocked sewing room for. This can be done sitting on the floor watching television, or on the kitchen table.  This project exploits an interesting property of Fleece. It does not fray. Thus we can cut a fringe of strips into the fleece without fear of it unraveling. Some fun furs have this property as well however the wrong side of fun fur would be on display and is unattractive.

You will need:
a cushion to cover (or a pillow, or a  pillow sewn in half)
Fleece
Scissors
Chalk
Pins 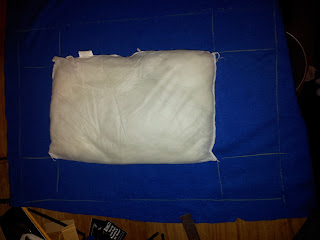 Place your cushion on a section of fleece right side up and draw around it. Then decide on the length of fringe you want, add a bit more for the knots and draw this added length around your cushion  Finally draw a square on each corner of the larger rectangle that reaches to the cushion (see picture, click on it to enlarge) 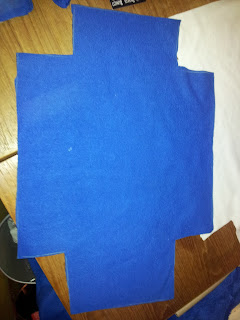 Cut out the larger rectangle and then remove the corners you drew on the inside of the rectangle as well. Use this as a template to cut out a second piece of fleece. 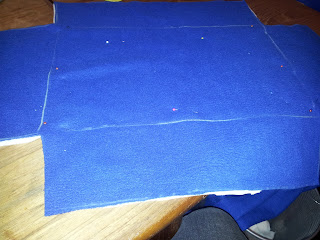 Place one of the fleece shapes on top of the other, wrong sides together and pin  together on the INSIDE of the small rectangle (the cushion sized middle of the shape). 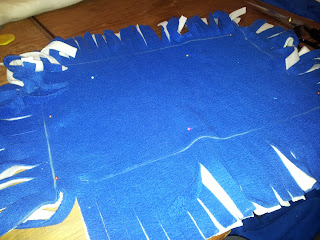 Cut a fringe from the outside of the fabric to the line marked where the cushion will be. Try to make the fringes of uniform thickness (I went for 1 cm) you CAN mark out each individual cut but to be honest by the time you take into account  where the scissors actually cuts you may as well do it all by eye. You DO need the same number of fringes on the top piece of fabric as on the bottom. This is why we cut the two layers of fabric at the same time. to make the fringes line up. 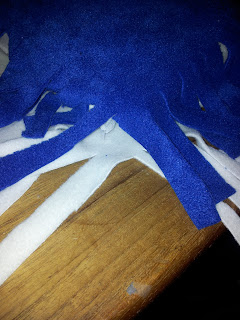 Place the cushion between the two layers of fleece. At one corner tie the last strip of one side of the top  layer to the first strip of the other side of the bottom layer.  This makes the fringe criss cross at the corners. Repeat for the other three corners. 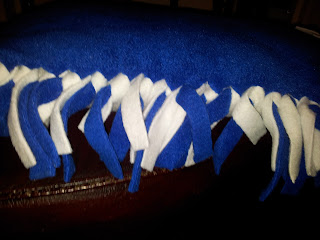 Tie the strips of the fleece of the top layer to the bottom layer's strips as shown, going around the cushion  Try to make the knots of even size and done up the same way each time. This gives a nice neat finish. 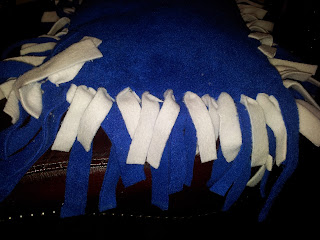 From start to finish this project takes less than an hour (depending on size of cushion).
This is a quick, cheap and easy way of making a cushion to match a room, and of pulling together different colours in a room.  You could make these as a gift for a sports fans using the teams colours. This is also a fantastic project to introduce textile crafts to the kids if they are stuck at home during the holidays. Being able to make something for their room in colours they like (for example, to match a football team) can give children a  real sense of achievement 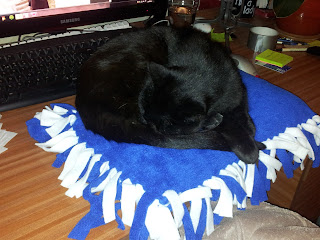 Although in my case my cat  has claimed my cushion as her very own.
Posted by Fabric8 Online at 19:05