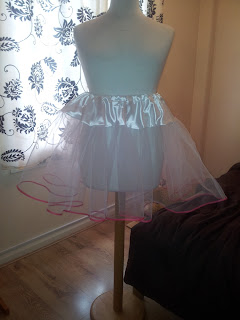 A local group have decided to organize a grand Gathering of Fairies on Sunday the 23rd of June at Ipswich  in an attempt to break a work record for the number of fairies in one spot, as well as to raise money for Woolverstone Wish. The definition of a fairy is someone with a tu-tu or petticoat, wings and a wand. I've already been asked to make a petticoat or three, and so I decided to show how I make my petticoats. There ore other, quicker ways which I'll cover next week, but this is my favorite way to make a petticoat.

My petticoats involve pleating a wide strip of dress net onto a very short satin circle skirt.  I think you get a lot of flounce out of just over a meter of dress net.

Step one. Making the Circle Skirt.

Do you remember learning all about Pi in maths in school, and wondering when you'd EVER need it. Well that moment is now. 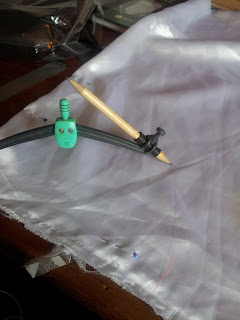 Two make a circle skirt you need to make 2 circles (or in this case quarter circles), one for the waist and one for the hem. Start by taking about 1.5 metres of fabric (I used a cheap lining satin) and folding it at 50 cm (so your selvages are resting on top of each other).
Now a little about circles. The distance from the middle to the edge of a circle is called the radius. The outline of a circle is called the circumference.  The first circle that we make is the waist line. So we know the circumference of the first circle (your waist) so the radius as this circle will tell us how far  from the corner of the fold in the fabric we have to draw.

The radius is equal to the circumference (waist size) divided by  6.28 (or Pi multiplied  by 2)
I find it's better to add a good few centimeters onto the waist measurements, ideally it should fit over your hips with ease. 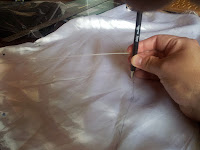 Craw in a quarter circle on the corner of the folded fabric with this radius.
The next radius is easy, it's the amount of the first radius plus the length of the skirt (in this case it's a 15 cm  skirt) So the second radius is 35 cm.
If you haven't got a compass that is 35 cm wide (and not many people have) just use some non stretchy string measured out to the length you need and wrap it around the pen. Then hold the other  end of the string into the corner and draw in the quarter circle. 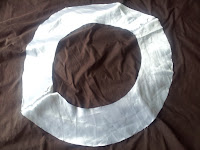 Cut out this quarter circle. As it was on the fold it should turn into a semi circle when you open it out. Keep it folded and use this as a template to cut out another semi circle on the other side of the fabric. With right sides together sew the semi circles together to form a circle. 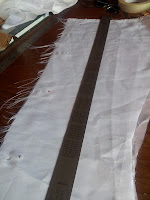 Step Two. Making the waistband.
The waistband needs to be as long as the final  waist measurement you used for the circle skirt, in my case 125 cm long. Cut out a strip of fabric to this length and make it four times the width you'f like the waistband to end up (I use my metal ruler as a guide). 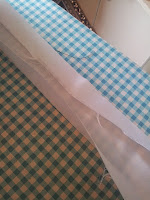 Now fold in half along the length , wrong sides together and press with an iron.
Open the fold and use the crease as a guide to fold the outer edges of the strip into the middle.

Fold it back in half again and press, this gives you what looks like large bias ribbon (but it is not on the bias). 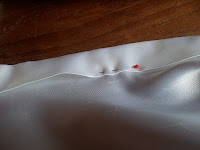 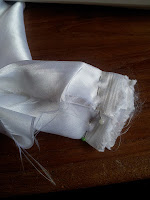 Believe it or not that's the fiddly annoying steps done. Now you just need to work out how much dress net you need and to pleat it into the circle skirt.

You have the final radius of your big circle already, it's the first radius (in this case 20cm) and the length) in this case 15 cm, making  35 cm in total.

The circumference is the radius multiplied by 6.28 (which we all now know is Pi multiplied by 2)
In this case that's makes  219 cm. 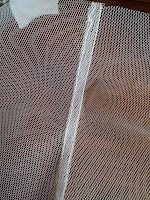 You can please up to three times the final hem circumference into the skirt, making 660 cm.
You don't have to though. I decided to pleat in 6 meters (600cm) as this is four times the width of the dress net. You can make the netting as long as you wanted, I opted for 40 cm. So I cut out 4 sections of 150cm wide dress net that were 40 cm long. Sew these together into a circle right side together. I also decided to sew the seam allowance flat onto the dress net.

Put a pin half way around your circle skirt, and another  half way around the netting. These will act as a guide (you want them to meet up in the middle). Now with right sides together pin the netting to the satin circle, right sides together. In my case the pleats were almost but not quite touching each other. Make sure the half way pins in the circle skirt and netting meet up (for greater accuracy you can pop a pin a quarter of the way around the circle skirt and a quarter of the way around the netting  and  use them as a guide (these too must meet up). Stitch in place. Once you get a feel for making these things you can pleat as you sew, but to begin with it may be worth pinning the pleats in first. 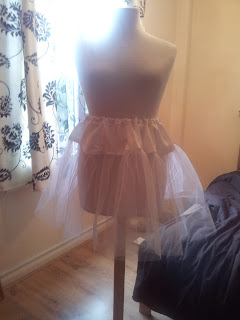 You now have a petticoat or tutu. I like this method as it gives you  the opportunity to add more layers over time (just pleat more netting into the circle skirt). 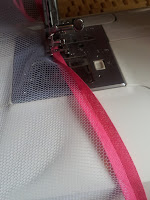 However I like to add a bias trim to my petticoats.
This takes less time than you may think and it adds a lot to the finished garment. Simply take your bias ribbon and wrap it around the hem of your petticoat. Then carefully top-stitch the bias in place.

I think the finished petticoat looks much nicer with he trim (I particularly  like how the trim looks like it's just floating in air).  I intend to add another layer or two over the weekend, so check back to see how it grows.

I wonder if this Tu-Tu is suitable for a 20 stone Welshman?
Hopefully this blog will inspire you to have a go at making your own Tu-Tu's, and hopefully we will see you at the World Record  Breaking attempt in Ipswich 23rd of June 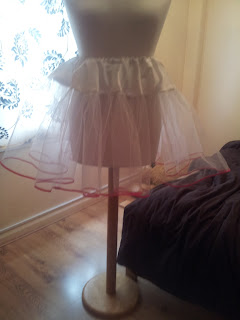